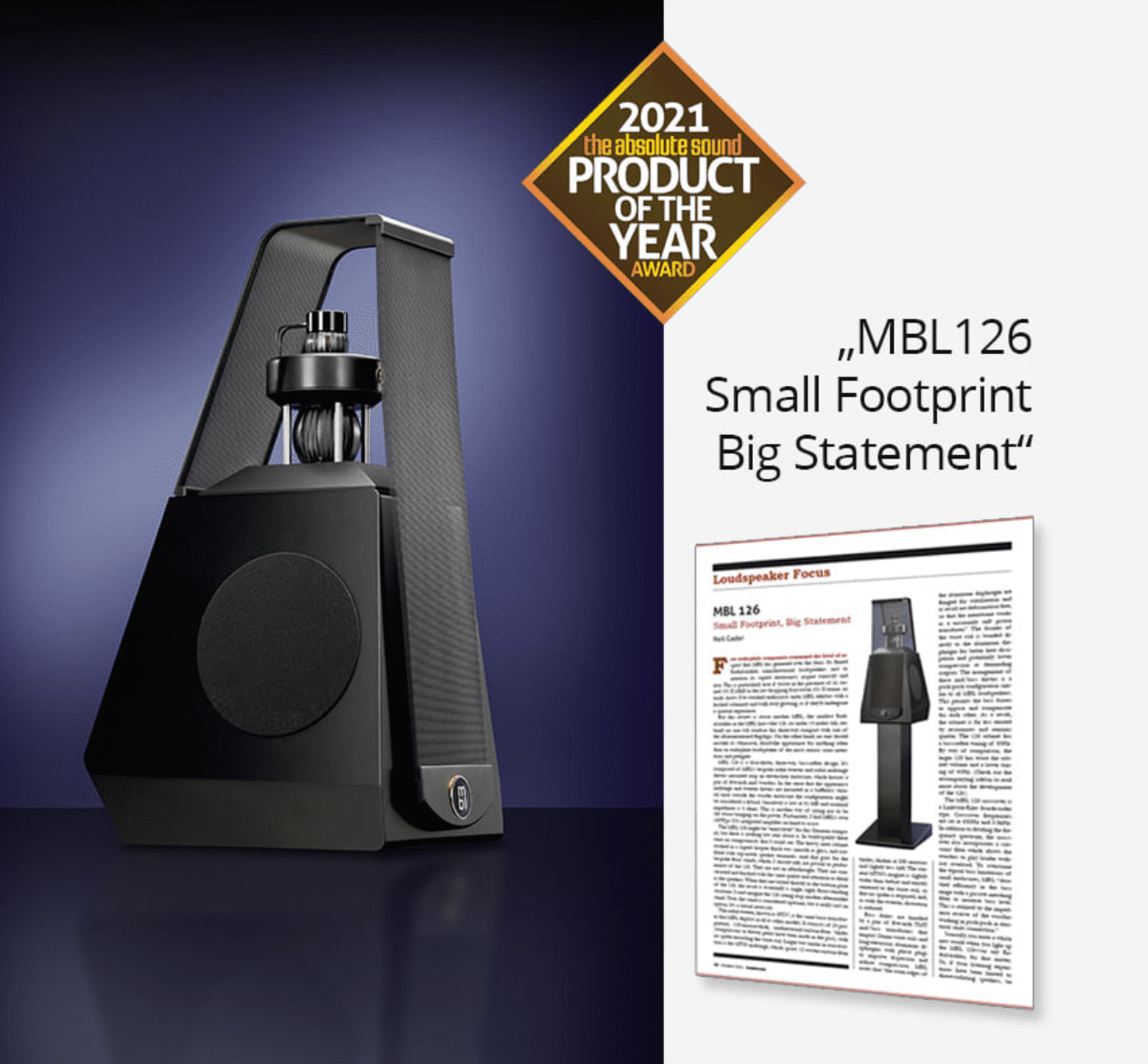 Few audiophile companies command the level of respect that MBL has garnered over the years. Its famed Radialstrahler omnidirectional loudspeakers (not to mention its superb electronics) inspire curiosity and awe. This is particularly true if you’re in the presence of its storied 101 E MkII or the jaw-dropping four-tower 101 X-treme. At trade shows I’ve watched enthusiasts enter MBL exhibits with a hushed solemnity and walk away glowing, as if they’d undergone a spiritual experience.

But this review is about another MBL, the smallest Radialstrahler in the MBL line—the 126. At under 14 inches tall, certainly no one will confuse this three-way compact with one of the aforementioned flagships. On the other hand, no one should mistake its whimsical, droid-like appearance for anything other than an audiophile loudspeaker of the most serious sonic intentions and pedigree.
MBL 126 is a four-driver, three-way, bass-reflex design. It’s composed of MBL’s bespoke radial tweeter and radial midrange drivers mounted atop an eleven-liter enclosure, which houses a pair of five-inch mid/woofers. In the sense that the uppermost midrange and tweeter drivers are mounted in a baffleless vertical array outside the woofer enclosure the configuration might be considered a hybrid. Sensitivity is low at 81.5dB and nominal impedance is 4 ohms. This is another way of saying not to be shy about bringing on the power. Fortunately, I had MBL’s own 180Wpc C51 integrated amplifier on hand to assist.

The MBL 126 might be “entry-level” for this German company, but there is nothing low rent about it. In build-quality there were no compromises that I could see. The heavy, inert cabinet cloaked in a superb lacquer finish was smooth as glass, and outfitted with top-notch speaker terminals. And that goes for the bespoke floor stands, which, I should add, are pivotal to performance of the 126. They are not an afterthought. They are constructed and finished with the same quality and attention to detail as the speakers. When they are bolted directly to the bottom plate of the 126, the result is essentially a single, rigid, floor-standing structure. I can’t imagine the 126 sitting atop another aftermarket stand. True, the stand is considered optional, but it really isn’t an option. It’s a virtual necessity.

The radial tweeter, known as HT37, is the same basic transducer that MBL deploys in all its other models. It consists of 24 proprietary, 130-micron-thick, unidirectional-carbon-fiber blades (comparisons to flower petals have been made in the past), with no spider encircling the voice coil. Larger but similar in construction is the MT50 midrange, which sports 12 woven-carbon-fiber blades, thicker at 200 microns and slightly less stiff. The current MT50’s magnet is slightly wider than before and exactly centered to the voice coil, so that no spider is required, and, as with the tweeter, distortion is reduced.

Bass duties are handled by a pair of five-inch TMT mid/bass transducers that employ 26mm voice coils and long-excursion aluminum diaphragms with phase plugs to improve dispersion and reduce compression. MBL notes that “the outer edges of the aluminum diaphragm are flanged for stabilization and as result are deformation-free, so that the membrane works as a torsionally stiff piston transducer.” The former of the voice coil is bonded directly to the aluminum diaphragm for better heat dissipation and potentially lower compression at demanding outputs. The arrangement of these mid/bass drivers is a push-push configuration similar to all MBL loudspeakers. This permits the bass forces to oppose and compensate for each other. As a result, the cabinet is far less excited by resonances and remains quieter. The 126 cabinet has a bass-reflex tuning of 50Hz. By way of comparison, the larger 120 has twice the cabinet volume and a lower tuning of 40Hz. (Check out the accompanying sidebar to read more about the development of the 126.)

The MBL 126 crossover is a Linkwitz-Riley fourth-order type. Crossover frequencies are set at 650Hz and 3.5kHz. In addition to dividing the frequency spectrum, the crossover also incorporates a subsonic filter which allows the woofers to play louder without overload. To overcome the typical bass limitations of small enclosures, MBL “doubled efficiency in the bass range with a passive matching filter to increase bass level. This is realized by the impedance reserve of the woofers working in push-push in electrical series connection.”
Sonically, you enter a whole new world when you light up the MBL 126—or any Radialstrahler, for that matter. So, if your listening experiences have been limited to direct-radiating speakers, be prepared for a surprise with the 126. Unlike more conventional designs, where frequency response and output tend to optimize on-axis but then roll-off precipitously as the listener moves farther and farther off-axis, omnidirectional radiators like the 126 release their energy evenly in 360 degrees—for all intents and purposes sounding the same if you stand behind them or in front of them. This creates a wider and more relaxed listening position and sweetspot. Naturally, serious listening still hinges on sitting in a “normal” position equidistant from each channel, or time-arrival issues will skew the output and balance. By virtue of their consistent on-/off-axis output, omnis will also engage room acoustics and reflections in a myriad of ways that require careful setup and attention to sidewall and back wall distances. Bring a tape measure. With Radialstrahlers the smallest shifts can yield major sonic rewards.
Anchored by its rich, warm midrange, tonal balance is natural, highly present, and toe-tappingly lively. From the most delicate transients to the most explosive percussion, every note simply sings with full-throated expression and jaw-dropping transparency. So open and expressive is its opulent and tactile midband that I had to constantly remind myself that I was listening to a “mere” stand-mount, just a couple inches over a foot tall.

Given the close proximity of the stacked transducers, I anticipated that interdriver coherence would be excellent. And it was. The 126 spoke in one concise and authoritative voice, rather than creating the off-putting impression of a tweeter chirping on top and a woofer barking below. Timbral details were explicit. For example, there was no guessing between a clarinet and an oboe, a violin or a viola, a steel-stringed acoustic guitar and a nylon-stringed classical. It’s a speaker of stunning contrasts, conveying a wide palette of musical color, temperature, and texture. From the chesty Tom Waits to the breathy Norah Jones to the Louisiana drawl of Mary Gauthier, the 126 was wildly alive on vocals, reproducing the actual physicality of the artist and the effort and breath control that goes into singing into a microphone or projecting out into an audience. I dare anyone to try Louis Armstrong singing “St James Infirmary Blues” through these loudspeakers without coming away from the experience emotionally touched by the profound artistry of the musicians.
Low-level details (in this I’m including sustain and decay characteristics) were simply astonishing in their resolution. As I listened to Debussy’s Clair du lune, I reveled in the shimmer of upper-octave arpeggios and the luminous harmonics captured in the lengthy sustain and decay from the piano soundboard. In terms of speed and transparency, the 126 was knocking on the door of planars and electrostats. Imaging and orchestral layering and dimensionality are, for want of a better word, nearly holographic; you can almost measure the space between the players and their music stands. A wide soundstage extending outside and far behind the 126 boundaries was common. And in terms of imaging, as cliché as this sounds, 126 flat out disappears from the room, kind of like, well, poof.
Bass was controlled, melodic, and dynamic into the 50-cycle range. Frankly speaking, the dynamism and control of the small five-inch woofers defied all my expectations. As it happens, MBL’s Chief Engineer Jürgen Reis plays bass. A coincidence? I don’t think so.

Most significantly, MBL has created an artful partnership between the bass drivers and the port. They work together imperceptibly, with little to no impression of port overhang or artificial emphasis. Lacking these colorations, bass timbre remains pristine, achieving a lower noise floor that makes bass performance from the 126 doubly surprising. And, dynamically, I found there was little need to coddle the 126. Light up a favorite Nirvana hit, reload Tchaikovsky’s 1812 Overture, cannons and all, and the MBL 126 will rarely run low on ammunition. And when they do, there is no protest—just a quick, clean bass roll-off. Further, these modest five-inchers matched up doggedly with the midrange and tweeter, mirroring their speed, pace, and precision.
Direct radiator or omnidirectional? Is one more “right” than another? The answer, as in most audio discussions, is a personal one and kind of depends, at least partially, on the type of music you gravitate to. The MBL 126 thrives on acoustic space, dimension, and the complexities of classical music. Does it accurately reproduce the venue, or is its dimensional soundstage partly an artifact of 360 degree dispersion? Every speaker-type intersects with the room to varying degrees, stamping the room with its own signature, and vice versa. If the directness of a studio monitor is more your thing, MBLs may not be the first choice. If a balance of spatiality and imaging more closely captures your concert-going imagination, then 126 might just be the ticket.

Taking off my reviewer hat for just a moment, 126 is also a party speaker without peer. During a small gathering at my home, an impromptu dance party broke out, at least in part courtesy of the 126 (yes, alcoholic beverages were consumed). The best that I can explain for this happenstance is that the omni-radiation pattern produces such a wide soundfield and in-room power response that subconsciously people are relieved of having to vie for a seat in the sweetspot. Cue the right music and anyone with a heartbeat just wants to start moving. Friends were sitting well off-axis, or cross-legged on the floor, or dancing to the side. Perhaps most trippy of all were the guests that stepped between the 126s, bending at the waist and dropping their heads level with the pair to get the “headphone” effect of the omnis in their ears. That, I didn’t see coming.
At just shy of twelve grand, plus those gorgeous stands, the 126 represents a considerable outlay, even amongst the high-flyers of the high end. Admittedly, I’ve sometimes struggled to justify the price versus the performance of more than a few components.

However, that is not the case with the MBL 126. They exceeded my sonic and musical expectations by a wide margin.

Let me conclude with an observation—it has to do with the way audiophiles and reviewers alike tend to downplay the achievements in the compact loudspeaker segment, reserving our highest praise for the latest statement or flagship product, creations suited only to the large audio canvas. Though MBL’s 126 is designed for the parlor rather than the palace, it’s as good as anything this esteemed company has ever made. In spite of its humble size, it is truly a statement loudspeaker of the first order. If you consider yourself a thoughtful audiophile and are preparing to take the plunge into this price range, don’t even consider making a move until you’ve auditioned the MBL 126. It is must listening. Hats off to Jürgen Reis and the MBL team. 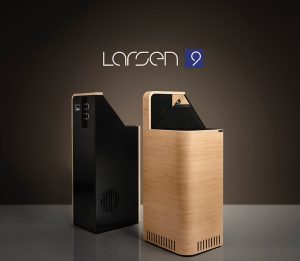 I, like everyone else, have had my moments of revelation, what Kenneth Clark calls in art “moments of vision,” where some experience imprints an indelible memory that somehow redefines one’s whole relationship to audio. 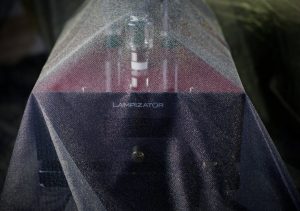 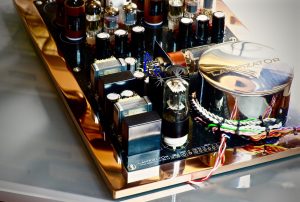